I’ve been having a lot of conversations lately, mostly with myself, about the nature of ‘Good’. I don’t mean good in an ethical or moral sense, but in an aesthetic sense.

Specifically, what is the difference between Good Art and Bad Art? Can art be bad? Isn’t it all just subjective anyway?

I said to myself, It’s Got to be Inherently Aesthetic. 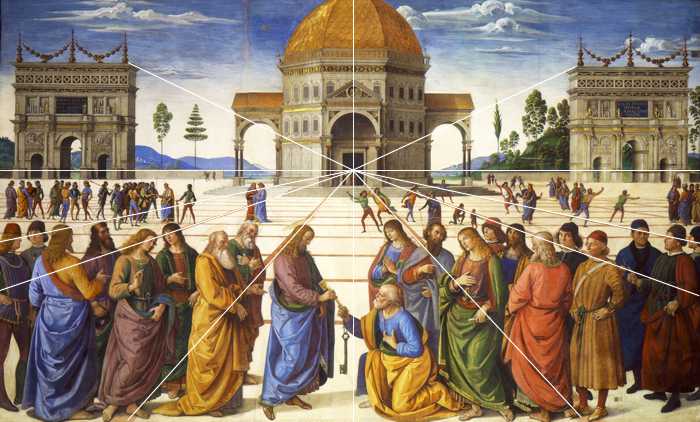 Perugino, ‘christ delivering the keys of the kingdom to saint peter’

Good Art uses methods which lend themselves well to a sense of beauty. These are techniques that an artist can employ, such as the Golden Ratio, or Leading Lines, or Complimentary Colours, etc. These are tools which, when put to good use, cause the viewer to feel something good.

And yet… there are plenty of things that use these techniques and that I would not consider to be Good Art. Plenty of Michael Bay’s movies are technically very good, but they make me feel sick.

So then I said to myself, It’s Not What It Looks Like, It’s What It’s About.

But then, why wrap it up in art? Why not just go around telling people exactly what you think? Why do we wrap up the intention in subterfuge? What is the benefit of subtlety? Why try to express an idea as a piece of art, instead of as a lecture or a speech?

So then I said to myself, It’s A Combination, Of Course!

Good Art is both inherently aesthetic and sure about what it’s trying to say!  Duh! Not only is it expressing an emotion, or highlighting an idea, but it’s doing it in a way that is also pleasing to the eye on a technical level.

But what about Good Art that isn’t either of those things?

Let’s stop for a moment and look at this

This is a painting by Jackson Pollock. It’s not very pleasing to look it, it’s just a bunch of lines and blobs, random colours flying together with no reason or meaning, it’s not trying to say anything, it’s not expressing anything other than a frenetic energy of sorts, and yet it is Good Art.

Because, I said to myself, It Has To Take Us Somewhere New 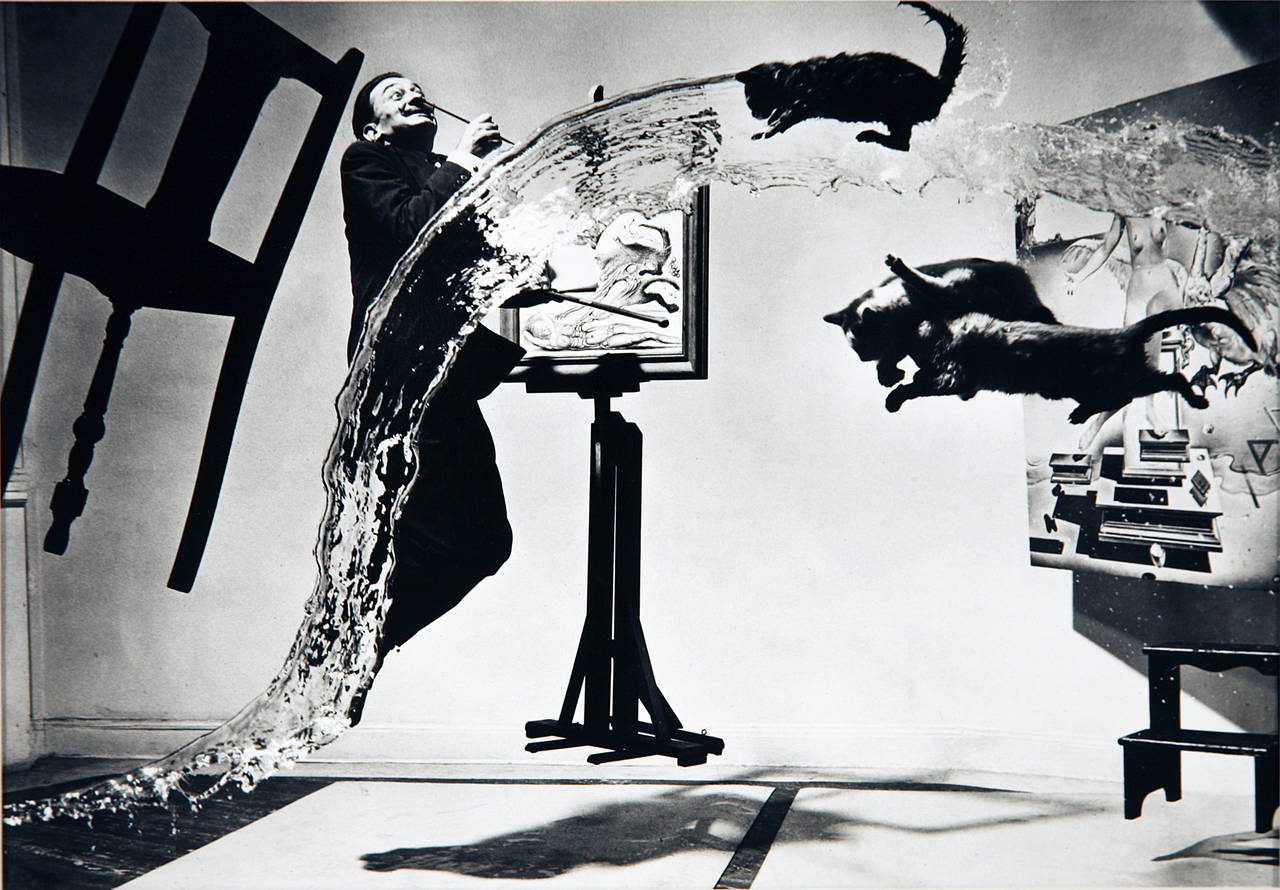 A lot of modern and postmodern art isn’t considered art by Joe Public, because they say: I Could Do That, or, My Four Year Old Could Do That. But, of course, they didn’t do that. And indeed their four-year-old didn’t do that, either. Pollock did that. He brought it into the fold of our imagination. He was the first.

When you take something that is the first of its kind, it’s very hard to explain, because there is nothing to compare it to. You can’t say it’s better or worse than other things, because it is unlike other things.

René Magritte The Treachery of Images

But then…. ah, but then I thought… Two Girls One Cup pushed borders, and that is not Good Art… No, sir… that is not good anything…

And then I thought, after I washed out my mind, that even IF something DID satisfy some sense of aesthetics, while conveying a thought, feeling, or idea, AND managed to push the borders of what is known AND was accessible to the public in a way that changes things  – would it even get picked up?

The world of art dealers and galleries is corrupt beyond salvage, to the point that Fine Art is now hoarded as an investment, rather than bought and sold for their Good.

I bought some art today from helenagrimes.com, a local artist with bucket loads of talent. I think her work is aesthetic, expressive, and, indeed, at times it pushes the borders just a little on what we look for when we look for art. It’s probably never going to be bought and sold for 445million dollars. Sorry. But I’d rather have some Grimes hanging on my wall than some dead painting by some dead painter.

Because at the end of the day, it really is individual. If you like something, like that you like it. Stop trying to explain everything to everyone. You just end up thinking about Two G-, no, enough, enough of that…

And anyway, stop analysing other peoples work: go out there and make some of your own. That’s where the gold lies. It’s not about the Art. It’s about the Creating.

This blog post was written by Shane ‘Artsy Fartsy’ Vaughan. If you have something to say and nowhere it, why not get in touch at stanzas.limerick@gmail.com.

What Makes Something ‘Good’?

But of course, with all good things, there comes a price – and it wasn’t just the hangover that got paid. I also very nearly didn’t write a blog this week. I was going to do it Wednesday, to get it out of the way, but I was busy with college; then I was going to do it Thursday but I got a call for work and had to answer; Friday was Stanzas; Saturday was bed-day, and now it’s Sunday and here we are.

When we’re faced with a problem, even something small like finding the energy to write a blog, we often have two responses. On the one hand, we tell ourselves It’s Ok, don’t bother with it, nobody cares anyway, they’ll never know, you deserve one more episode on Netflix. And on the other hand we say, Come on human, you said you’d do the thing, now do the thing!

We celebrate because it’s a way of recognising that We Did The Thing. It’s important to celebrate those victories, even the little ones; especially the little ones. Because one day you won’t be able to get out of bed, you’ll be wondering what it’s all for, and, with any luck, that little voice will come back, trained and stronger than ever, telling you to get up, do the thing, you got this.

So celebrate! Just remember… celebrate in proportion to the achievement.

This blog was written by Shane ‘OhGodOhGod’ Vaughan. If you have something to say and nowhere to say it, write to us at stanzas.limerick@gmail.ocom

Why Do We Celebrate?

Ah, the Word Salad, our favourite kind of salad.

So, the other day I was putting together a CV, as one does every now and then, and because this particular CV is focused on design and creativity, I put in that I make chapbooks once a month as part of Stanzas. And there’s nothing wrong with saying that. Until someone asks, What’s a chapbook?

For us, this question has been four years in the making, and we’re still figuring it out month to month. But mostly: it’s printed, it’s low-volume, it’s one-of-a-kind, and it features art, writing, or some combination thereof.

When we first started, these were A6, home-printed, badly spliced together off-cut barely-books that we made and sold at the third ever event because we wanted to make a bit of dosh. That first event, back in September 2014, was a great one, and people loved the books. Inside, we four stanzas grandaddies, each wrote a few pieces, and I think we made a tenner each on the proceeds. A night of heavy drinking ensued, bellied by the tenners.

But then we opened it up, we asked you guys for your words, and we put that money back in to getting bigger and better guests, to putting on festivals, to making more books, and CDs, and posters, and badges & & & …

For us, the monthly chapbooks are a way to see what’s out there: and there is so much out there! It’s also how we stay afloat while we wait for some rich uncle to come along and make our dreams come true. But most importantly, it’s a way for you guys to see your work in print – even sometimes in poorly home-printed off-cut barely-books.

There’s something succinct about ink and paper. Something definite and concrete. The chapbooks aren’t just a bit of fun, they’re an opportunity. And, if nothing else, they very occasionally help to buy pints. And that’s gotta be worth fighting for.

This blog post was written by Shane ‘McThirsty’ Vaughan. If you have something to say and nowhere to say it, why not get in touch at stanzas.limerick@gmail.com

From the moment I woke it was all wrong, like someone had put my brain in backwards. I was tense, frenetic, nervous, anxious, peeved, miffed, muddled, and, in so many words, wild.

Later, of course, I looked up into the sky and saw the moon: full and bright and glowing like a saucer of insanity.

It’s not so much the moon’s ‘fault’, but I can’t help offload some of the blame to La Luna. After all, if she didn’t tug and pull at the ocean, maybe she wouldn’t tug and pull at my neurons – but then, yes, a world without waves would be rather dull…

It was  Aristotle and Pliny the Elder who first subsumed the moon into human ailments. They argued the brightness induced epilepsy and bipolarity, and while I have no experience with epilepsy I can certainly attest to feeling unlike myself when the moon is most full.

So last night we had SLAMZAS. And it was fun, maybe not as full as the moon, but it happened, it went ahead, we had competitors, an audience, judges, a musician, a venue: all the ingredients for a good night.

We just needed an MC…

Technically, of course, I was the MC. Except you wouldn’t have known I’ve been speaking in front of crowds for years by the look of me. I stuttered, stumbled, misplaced whole sentences and withered on the vine. A part of me, the part still me, was shouting at the back of the upsidedown backtofront brain saying SPEAK! SPEAK DAMN YOU! but the part of me, the moon part, was doing the speaking, and it was moon-talk, not human talk.

The Greeks also knew a thing or two about poetry. Ever hear of a certain nobody called Homer? No, not that one… Homer was the kind of guy who’d get up to do a poem and still be speaking two books later. The way the Greeks saw it, poetry was meant to be spoken – no paper, certainly no phones, just pure wordage and a captive audience.

It was primitive and tribal and beautiful enough to still be influencing Millenians three millennia later.

Someone asked me last night why it had to be a competition, why can’t we just share the words? And that’s valid. But we already have a place to do that, it’s called Stanzas. Stanzas is a safe cushion of warmth and love and openness where anyone can join in without fear of repercussion or oppression or hate or even embarrassment.

SLAMZAS on the other hand, that’s where we pull the rug out, take away the safety net and make you work for the words. Stanzas is the kind of place those who listened to Homer would have gone. SLAMZAS…. I’d like to think that’s somewhere Homer himself would have enjoyed.

Not every moon is equal, not every poem a slam. We have to listen more. Listen to our bodies when they say Not Today… listen to our words when they want to be whispered… listen to each other, even when we say things we don’t want to hear.

This blog post was written by Shane ‘What’s My Name?’ Vaughan. If you have something to say and nowhere to say it, why not drop us a line at stanzas.limerick@gmail.com