So this week has been a big one for us – we put in a ma-hoo-sive application for the Weekend of Words festival 2018 and, as some of you may know, Grant Writing literally sucks the life and soul out of the writer.

Maybe some people get a kick out of writing grant apps and filling out forms, but for us, and for a whole bunch of creative people that we know, we may as well bang out heads bloody while screaming GIVE ME THE MONEY I MAKE THE ART.

But in the middle of all this head-banging and void-screaming, we found a fun little writing game on our newsfeed. All we had to do was share it, and all you had to do was comment, and then we’d come up with a little sentence or two about you as if you were a character in a book! 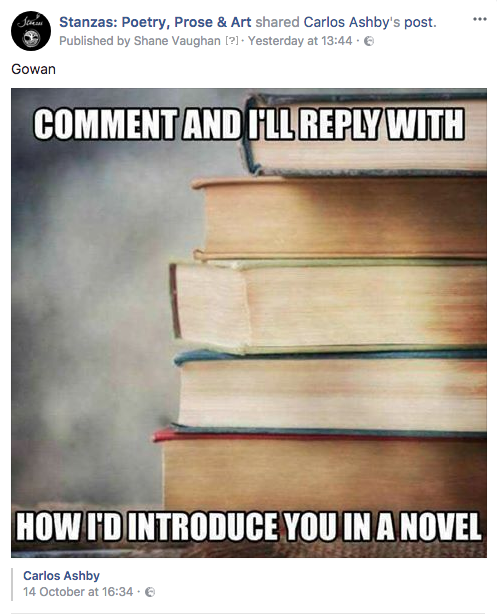 Well, from there things got a little out of hand…

Over two thousand people saw that post (however briefly) and at the time of writing we have over fifty comments – by far our best post ever (including some of the ones we bleeding well paid for!)

So we started writing some introductions… some of them were silly:

And some of them were fun: 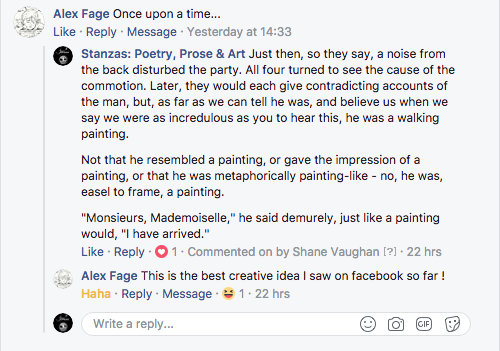 Some of them we wrote because we knew the person would understand the context, like this one which we wrote to mimic Kerouac: 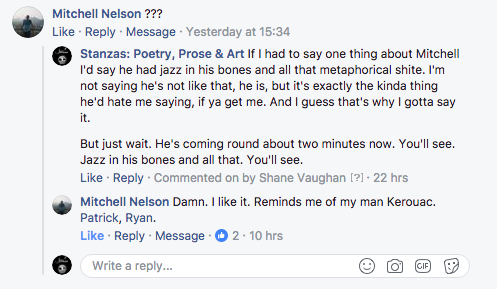 And some of them we wrote only knowing a very small amount about the person in question:

Eventually, after a few hours (days) of writing replies, we’ve hit a wall, and can’t write any more! (for now…)

But the really beautiful thing about all this is just how much fun it was to write a little snippet of a larger world.

Sometimes, when we’re bogged down in the nitty-gritty of event management, we can forget what we’re here for. And of course the answer has to have an element of fun in it. If we’re not having fun then how can you have fun? and if you’re not having fun, then why the hell do you keep coming back to us?

Games like this, like the 5 word challenge, like writing prompts, they get the mind active, and they reduce the stress of having to come up with something ma-hoo-sive, because it’s just this little sliver, just now, just here.

So the next time you think you’ve hit a block, or you’re up the walls with essays and applications, maybe share a witty post on facebook… who knows where it will lead…

This blog post was written by Shane ‘Crazy Boy’ Vaughan. If you have something to say and nowhere to say it, email us at stanzas.limerick@gmail.com